Sala Keoku houses a wide variety of monolothic icons, and they’re not as old they might appear.

Just outside of Nong Khai is the vast concrete jungle of religious iconography known as Sala Keoku. Begun in the mid 1970s, this huge sculpture park-meets-spiritual site is perhaps the most well known of the works of the myserious Bunleua Sulilat. Bunleua has inspired many interpretations, but the sculpture parks in Thailand and Laos which have become his legacy are anything but intangible. Born in the early 1900’s, this monumental sculptor-turned-mystic (some say the reverse) gained notoriety for his singular mingling of art and spiritual beliefs. He combined Hindu, Buddhist, and Animistic imagery into powerful and imposing presentations of divinity, myth and some of the Buddha’s no-doubt limitless poses. Despite never donning the saffron robes of the monkhood, Bunleua is sometimes referred to as Luang Pu, roughly venerable father, which indicating stature as a religious icon. His mummified remains rest in a large but cramped and haunting exhibit of relics commemorating his life’s major events. Spread throughout are recently placed and long-decayed flowers, beads, incense and other offerings to his memory.

A more traditional depiction of the Buddha 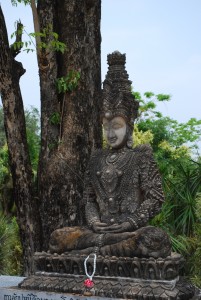