When the time came to leave Bangkok, Hannah and I decided it was time for a marathon train ride to the Thai-Laos border. The journey of nearly 400 miles would takes us through the heart of the northeastern Isaan region, a huge and generally flat swathe of agricultural land home to nearly one third of the Thai population. In April this area can be unbearably hot, and in combination with the ongoing regional drought made for an arid landscape full of sun-cracked rice paddies and framed by red dusty dirt roads.

The history of the Isaan region reveals a culture that at times diverges greatly from those found in central Bangkok or northwestern Chiang Mai. I learned recently that this is in part due to the region’s historic ties to the Lan Xang kingdom, centered in what is now Laos. In fact it was not until late in the French colonial project that these territories were ceded to Thailand, which in turn brought about the current arrangement of borderlines. This helps to explain why much of the Isaan population speaks a dialect closer to Laos than Thai. It’s customs are unique, and its cuisine a delicious fusion. 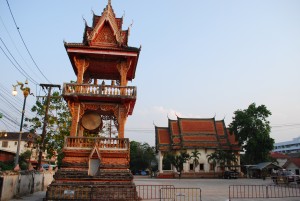 This is one of many temples found along Nong Khai’s waterfront streets.

The sleepy town of Nong Khai sits on the edge of the Laos border, just across the Mekong from Vientiane, and nestles by far the most widely used border between the two. Our time here was easy-going, and gave us an introduction to the widely reputed and somewhat unsettling “Farang daddy” culture found to varying degrees throughout the country. Farang being the general use term for any caucasians, tourists or otherwise. Our few interactions with these couples have brought mixed results, and we are still somewhat wary of this strange phenomenon. We have yet to see its reverse, although we await anxiously, and perhaps in vain. 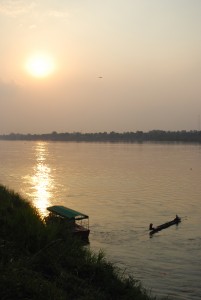 Sunset fishing on the Mekong River.