Like a pellet from a sling shot April has launched springtime onto California whether it is ready or not. In some places rivers are still running high, and while a few eager beavers have inaugurated another season guzzling Lime-a-Ritas at their favorite swimming hole, most remain in their garages, putting the finishing touches on chrome toys, sucking diesel fumes and grinning in anticipation of the coming frenzy. This weekend’s uptick in temperature on the North Yuba river inspired yuppie supper parties of immense proportions, where wines of Napa and Sonoma flowed freely and the sounds of Steely Dan echoed into the night.

But these are the lucky places, and even the most fume-choked Californians are beginning to realize they are fewer and farther apart each year. Many in the sun dress and fedora crowd of Southern California were disappointed this weekend to learn that runoff ash continued to muck up the creek behind their favorite winery. Of course, this disappointment was quickly put in perspective by the cranky minority who drove through two hours of traffic over twenty miles only to find their own favorite had been burnt to the ground.

While passing through the Los Padres forest of Coastal Southern California recently I was reminded of the fickle and progressively worsening state of wildfires in my home state. Only one year before I had visited the area amidst an impressive super bloom of wildflower life. Now, exactly one year later, the same places that had teemed with verdant greenery and wildflowers were hillsides dominated by blackened Manzanita trunks over the grey and brown of Miocene sandstone. 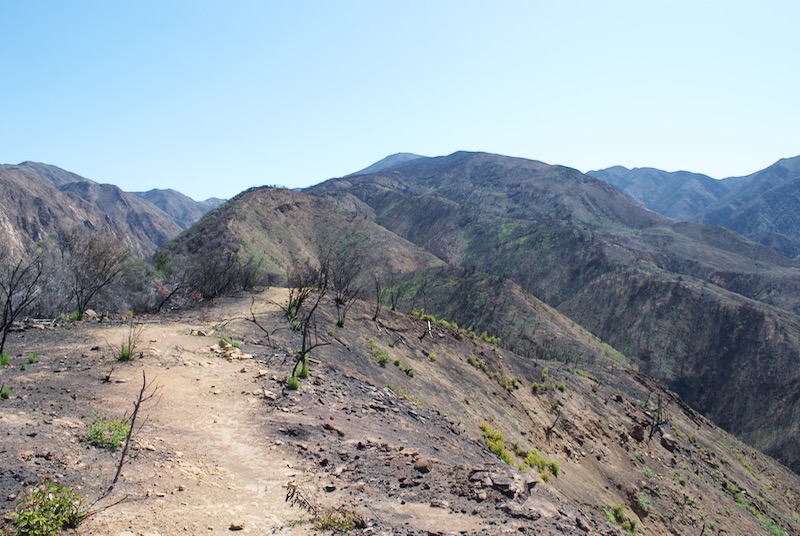 The Thomas fire of Santa Barbara and Ventura counties burned over 280,000 acres and destroyed more than 1,000 structures, making it one of the most destructive fires in California history. Perhaps even more alarming than the damage though was the fact that the Thomas fire burned from December 2017 to mid-January 2018, placing it squarely outside what many consider the traditional ‘fire season’. One can’t help but wonder what the coming summer will bring.